Because the gasification temperature circle of mercury is lower than the melting point and boiling point of gold, the mercury and gold in mercury paste are separated by distillation.

The solid mercury paste is placed in a sealed cast steel tank, the top of which is connected to an iron pipe containing a condensing pipe. When the temperature rises slowly to 356 degrees, the mercury in the mercury paste is vaporized and escaped along the iron pipe, and then recovered in a container with spherical droplets below the water after condensation.

Gongyi Forui machinery factory,  founded in 1986. We are one of the leading suppliers of beneficiation equipments in Asia. Don’t hesitate to Contact Us, if you have any question of beneficiation. And welcome to visit our company. Gongyi Forui Machinery Factory dedicated to serve you! 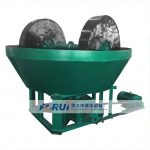 Compared with the flotation, gravity beneficiation of lead-zinc ore has many advantages, such as small investment, low cost, and no…

DO YOU KNOW HOW I GOT 6 OUNCES OF GOLD FROM A GOLD MINE IN ONE DAY?

If you have a gold mine with a gold content of about 2g/m³, then you can get 6 ounces of… Do You Know How to Extract Gold Based on the Nature of Gold Mines?

Factors that affect the efficiency of gold extraction include the gold mine nature, the beneficiation equipment, and the method of…